This is another image that I made at Plum Island in Massachusetts.

A week ago, I was out on the ice making photos of the fishing derby. After a week of warm temperatures, including 70F/20C degree days, all of those ice fishing shacks are off the lake and my wife and I took our bikes for a ride on Plum Island. Plum Island is a barrier island on the Massachusetts coast. Half has high-end beach shacks and the other half is a wildlife refuge. We road through both and enjoyed a picnic lunch by the sea.

Whenever we visit Plum Island, we pass this cool looking vintage airport between downtown Newburyport and the barrier island. We stopped the other day to make a few photos. It turns out to be one of the oldest airports in New England. Even though the airport opened in 1933, powered flight on Plum Island dates back to 1910 when a local yacht designer built a small airstrip between the marsh and sand dunes. Plum Island Airport tries to maintain the history of the site and has a small museum inside the Quonset hut shown here. Unfortunately, we did not realize this when we visited. Actually on Sunday, most people seemed to be here for the taco truck. 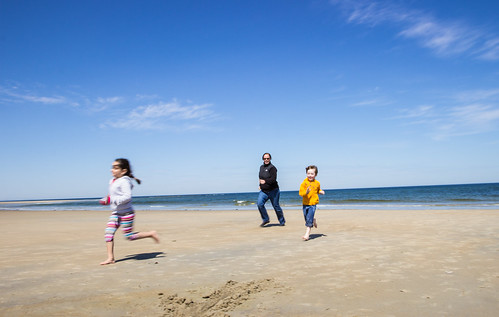 Another shot from our trip to Plum Island on Monday.