This is my favorite building in Santa Tecla. It is referred to as the Palacio de Santa Tecla, though the official title is Palacio Municipal de Bellas Artes.

It is estimated that it was built as a home in 1911 for the Castaneda family. Between 1924 and 1927, the property became part of the municipality in order to pay a debt the family owed to the city. It was considered a jewel, with 17 rooms, imposing columns and the central courtyard highlighting the eclectic colonial style.

Over the years, this building deteriorated by inclement weather and natural disasters. The January 2001 earthquake caused more damage. However, the city joined efforts with the Government of Andalusia Spain to restore and preserve the original architectural details. Today, it serves as an artistic venue for children, youth and adults. You can see in the photo above the local regimental band playing at the monthly concert. 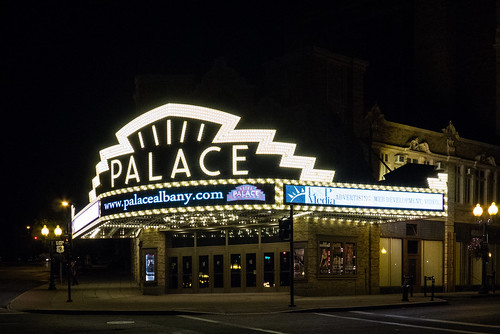 Exiting Buckingham Palace, a photo by Christopher OKeefe on Flickr.

This is the rear exit from Buckingham Palace into the Gardens. While I’d love to say the Queen had us over for tea, the reality was that she was on holiday in Scotland and we paid to tour the palace’s state rooms.