Wright’s Bridge stands just a mile from the last bridge featured here.  Like the other bridge, it is a covered railroad bridge that crosses the Sugar River.

Getting to this bridge takes a bit of walking.  I parked at the intersection of the road and the multiuse trail and walked about a kilometer to reach the bridge.

I rode my bike on this multiuse trail several years ago.  Motorized vehicles are allowed on the trial and several times, groups of dirt bikes and ATVs passed me.  They were always respectful, and the lead rider always signaled the number of vehicles in his or her group so that I knew how many riders to expect.

One thing that I appreciate about this bridge is that the abutments look authentic.  Often when the support structures need replacing or reworking, modern concrete is used.  When that happens, the abutments look out of place.  The people who maintained and restored this bridge went through the effort and expense to use a stone abutment.

Originally built in 1845, the bridge burned in a suspicious fire May 25, 1993. The town was described as being “devastated’ at the loss.  Covered bridges are not the most practical means to cross a river in the modern age and the town and state made plans to replace it with a modern bridge made from concrete and steel.

The residents of Newport petitioned the town and state to replace the bridge with a wooden covered bridge, raising thousands of dollars to cover the difference in cost.  A little more than a year later, on Columbus Day weekend, the new bridge was pulled into place by a team of oxen.  I spent about an hour trying to locate a photo of the oxen pulling the bridge but was unsuccessful. I did however find this video of oxen pulling a different bridge into place.

This was the first bridge on my last covered bridges of New Hampshire outing.  There are only three photos of this bridge because other than the one image inside the bridge, I did not venture to walk around inside.  There was some moderate traffic, and it moves quickly through the bridge.  Self-preservation kicked in.

I can’t finish a series on Newport, Rhode Island without showing some of the summer homes (termed “cottages”) built along Bellevue Avenue by America’s wealthy around the beginning of the 20th century. Many are now museums, which give tours, though some, such as Miramar shown here, are still private homes.

The Breakers is a 70 room Italian Renaissance style palazzo built in 1895 and stands as the most visited attraction in Rhode Island. Not wanting to pay the visitors fee to enter, I shot through the iron gate and was fortunate to catch this group of service men and women exiting the famed mansion

To run the 50 room Marble House, you needed 36 servants. My favorite part of this mansion is in the rear of the building where there is a replica of a Chinese tea house in which Alva Vanderbilt hosted rallies to support giving women the right to vote. Go Alva!

Rosecliff was where the 1974 film adaptation of The Great Gatsby with Robert Redford was filmed. I managed to get onto the property to get a couple of photos. 😀

Miramar was designed for George Widener but completed for his widow. It seems Mr Widener booked passage on the Titanic. It is still privately owned by a former Goldman Sacks executive.

I’ve shown you a few. If you’re in Newport, it is worth touring a couple for the art and craftsmenship…and to perhaps see what it was like to be Jay Gatsby or Daisy Buchanan.

An additional images from Thames Street in Newport, Rhode Island.

The heart of Newport is Thames Streets and the docks whose shops and restaurants teem with people on a nice day. Thames St. is one of the oldest continuously used streets in the state leading to some wonderful old architecture.

This tower stands in the heart of historic Newport. Nobody is exactly sure what it is. The conventional wisdom is that it is a former windmill with radiocarbon testing dating it back to the late 1600s. Alternative hypotheses, suggest it was built by the Vikings, Medieval Templar Knights, Portuguese explorers and Chinese sailors, to name a few.

Where do you think it came from????

Yesterday you saw the cycling part of the Tour de Jonquilles. Today, I present the flowers and fulfill a request.

Last weekend, my wife and I drove down to Newport, Rhode Island for the Tour de Jonquilles. Newport is a seaport town that in the 19th century became the place where the wealthy and powerful in America built summer homes. Currently, they have planted over 750,000 daffodils with a goal of a million. We took a leisurely group ride, touring of the town. Today, photos of the tour and tomorrow, photos of the daffodils. 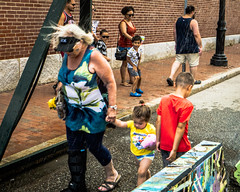 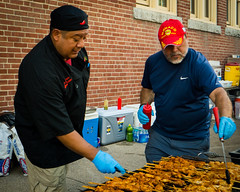 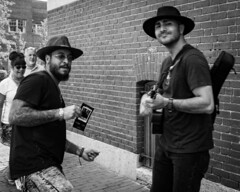