This field lies between our home and the nearest city. I drive by it a lot and have loved this planting of what looks to be some type of wheat. On Sunday, I managed to have my camera with me at the same time that we had some really nice light. It’s a good think that I did it then because all of this is gone now. They are preparing the field for the next planting.

The stand for a local pick-your-own strawberry farm stood empty a few weeks ago waiting for nature to be ready. She will be opening up a few weeks from now.

This is a local field at Brookdale Fruit Farm in Hollis, NH. I liked how the mulch created a contrast and was blessed with a really nice sky.

I made this on a day that we had a bit of snow just before Christmas. It is a farm in the next town over.

No, summer has not suddenly returned. I wish! This is an image from a shoot last summer that I just stumble across.

Yesterday, we visited Hancock Shaker Village on the Massachusetts border with New York. They are a Christian sect founded in the 18th century. Few of them remain. They are known for living simply and for their craftsmanship. The Shaker village in Hancock Massachusetts is now preserved as a museum.

Wednesday, we went to the Marsh – Billings – Rockefeller National Historical Park in Woodstock, VT. The park is dedicated to the memory of three men who lived in the home (Marsh, Billings and Rockefeller) and who were dedicated to conservation and ultimately helped to preserve lands in our country’s national parks. Across the street is the Billings Farm and Museum, a working dairy farm that is open for tours and shows the history of farming.

The photos show two Tiffany stained glass windows. One is called “Passing the Torch” and is very fitting to the idea of conservation as it moves from one generation to the next. The other is in the music section of the parlor. The text reads, “Here will we sit, and let the sounds of music creep in our ears; soft stillness, and the night, become the touches of sweet harmony. Merchant of Venice Act V”

My supply of images for Milford Street is getting a bit low. I need a good (not freezing) shoot this weekend. This is an old shot, an accident really. My friend Isi texted me, asking what I was doing. I was in a bank parking lot in Hollis, NH. I quickly snapped this with my iPhone and just really liked the outcome.

I’ve had so many posts lately from Boston, that you might forget that Southern New Hampshire is home. These were made at Brookdale Fruit Farm in nearby Hollis, NH. Yesterday’s image of the Christmas trees sale was also made here. Once the farm machinery finishes the harvest, the farm workers decorate them with lights and wooden reindeer. They not only sell trees but also wreaths and other greenery as well as wonderful food inside. 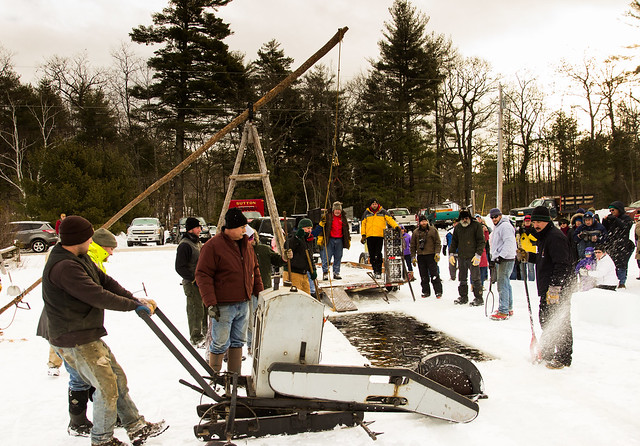 I visited Sutton, New Hampshire yesterday to witness their annual ice harvest. In the days prior to refrigeration, ice was cut into blocks each winter and stored for use in coolers during the summer. Muster Field Farm, a working farm and rural life museum, uses the ice from this harvest each winter to make ice cream in summer. Over the next few days, I share additional images of the harvest that will give a pretty good idea of how it all worked,