One of the other events from our little town’s Winter Carnival was a sledding party. The town closed down part of one of the streets that has a huge hill and they dumped snow from a nearby school parking lot onto the road and patted it down. This required some rather large equipment. Then families lined up to sled (and snowboard) down the hill. By the next morning, the town had cleared the snow away again.

This represents the rest of my images from last weeks Ice Fishing Derby. I happen to be passing by when this girl pulled a pickerel (fish) up through the ice. She was so proud. The temperatures have gone way up since Sunday, I have no idea how good the ice is now.

Last weekend was the annual Ice Fishing Derby in our little town. Actually, they had a three-day Winter Festival and the derby was part of it. It was the warmest derby that I have been to. It was nice not to freeze, but not many people drove their trucks out on the ice. As always, the people were friendly and having a good time.

When I go out to take photos, I’m traveling light and just walk out. But if you have your food, fishing gear, fire wood and perhaps a beer or two then walking out is less than practical. Here are a collection of modes of transportation that people here use to get out to their bob house.

Life on the ice is pretty interesting. As you can see, there are many ways for people to decorate their bob houses, from signs to flags to lettering. And there is much to do, besides fishing. People have to chop wood for their woodstoves and do maintenance on their bob houses. The ice freezes around them, requiring them to chop them free with axes by the end of the season. Cooking is a big part of the day. It is like tailgating for a sporting event or concert. And there is traveling around on various vehicles…more on that another day. 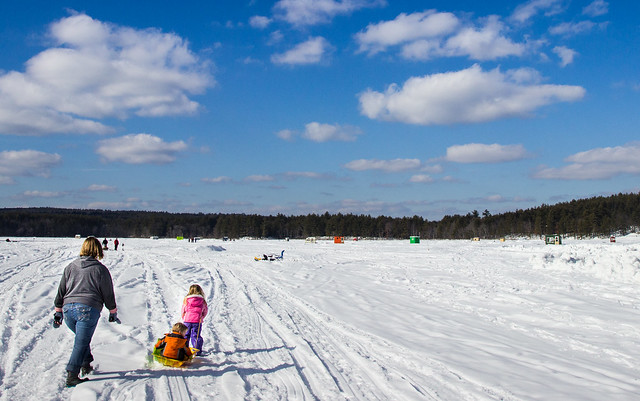 Despite a small-ish overnight snowfall, it was a glorious day with temps about 39F/4C. Driving around with my camera looking for places and people for photos, I found the ice rink and conservation land virtually empty. It turns out, everyone was on the lake. With all that sun and the snow reflecting the light, it was actually warm there. I saw one guy hand angering a whole for ice fishing wearing a t-shirt and jeans. Some people were riding their sleds (snowmobiles), or ice fishing or just soaking up the atmosphere. This family was heading out from the parking area.

This young man is watching for the flags to go up on the tip-ups, signaling a fish has been caught.

A bob-house with creative paint job

Having lived most of my life in New England without attending an ice fishing derby, it seemed like an ineresting idea to explore a local contest in our town.

Heading out onto the ice a dawn. There is a loop road plowed on the surface of the ice.

The most impressive thing was the wonderful people I met out there oon the ice. They were so kind and welcoming. Let me introduce some of them.

One of the first peole I met when I arrived, he had caught this four pounder when I stopped by later.

These two men invited me in to show me the inside of their bob-house (the converted trailer with the flag) and to get warm. It was most welcome.

This woman sat out on the ice fishing with a rod and reel. She was dressed quite warmly and did not seem to mind the cold.

I was fortunate to be there when this woman caught a fish.

These two young men were setting up a tip-up

This young man is watching for the flags to go up on the tip-ups, signaling a fish has been caught.

There were quite a variety of so called “bob-houses”. Here are a few:

Outside this bob-house is a tip-up. The crossed pieces keep it above the ice. At the end of the bent rod is the line and hook. When a fish takes the bait, the rod and flag pop up. Fishermen (and women) can watch from the warmth and comfort of their bob-house.

These temporary shelters are an option for people who go to various lakes.

This bob-house just had to be photographed. Many of them sported flags.

On the wall inside the bob-house I visited, visitors, including myself, write their name and something on the wall or ceiling. This was written by the father of the owner.

Thank you to all of the people who made me feel welcome and let me take their picture. It made for a very fun morning. 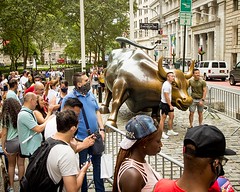 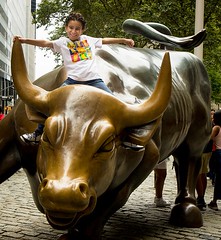 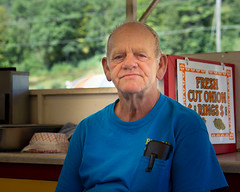