Peligroso is the Spanish word to say something is dangerous. It is usually followed by the word for caution, “cuidado”.

A few years ago, I attended a talk by a man who rode his motorcycle from his home in New Hampshire to Tierra del Fuego at the tip of South America. The reality, he described, is that it’s not hugely dangerous, but you have to pay attention. He said he would be on a rural road and would see a series of rocks placed in the road. The first time it happened, he thought it was unusual and slowed down. That was smart because the side of the road up ahead was washed out. The rocks were the warning sign in a place that has no traffic cones. You can’t walk around with your head in the clouds.

Here, it is similar. You really do have to pay attention. There are routinely holes in the sidewalk that could take out your ankle. The traffic is way more dangerous than are the gangs. (Personally, I think the crosswalks are largely decorative). You have to be careful at the beach. Check out the link to the video below and note the size of the waves and that there are no lifeguards. I watched a couple of amateurs try to surf in shallow water and get pounded into the black sand on the bottom. As far as personal safety, much of it entails things my grandmother taught me about watching who is around you and not flashing wads of cash. The idea of not being able to have my iPhone out in public, restricting my camera use and not wearing my wedding band is less than desirable.

As I write this, I think to myself that these are all areas of concern back in the U.S. True, but back home people can manage to walk around with their earbuds and not have to worry as much about being struck by traffic they don’t hear coming. People in the U.S. will mostly stop for you when they are supposed to and not expect you to get out of the way. You seldom see people walking with earbuds here, unless they are in the park. At home, I have to be careful carrying my Canon dSLR, but can have it out of my pack all day. I did not even bring that camera with me on this trip, opting instead for a smaller Lumix camera that I am very careful as to when I remove it from my bag and for how long. Back home, the surf can be dangerous, but many (not all) areas have a good life guard service that will try to prevent you from swimming and attempt to save you if you don’t heed their warnings. Here, as I left the compound where we were having a gathering to walk along the beach, the overweight guard, who may or may not know how to swim, just pointed at the ocean and said “Peligroso, cuidado.”

People who spend time on the water or traveling off the grid a bit know what I mean. My wife and I have shared some amazing times cycle touring. We have sent multiple days in strange places riding from one inn or hotel to the next. But we have to be much more careful on those trips than in everyday life. The traffic patterns are strange and we don’t know the places through which we are traveling. We make a good team watching out for the risks. That is everyday life here.

Having strong connections through Teaching You, the program here, is what really made this trip possible. They set up housing in a good area and taught me what I need to know. I tend to only travel solo in my comfort zone and save trips out of area for times I am with others. Still, every time I step outside, I have to bring my brain with me. 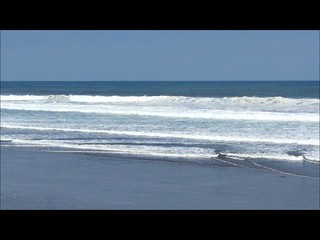 I made the top image by shooting through my sunglasses using my iPhone.